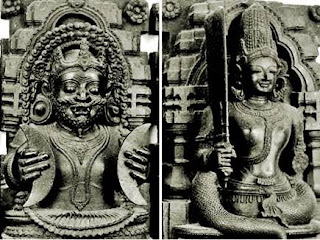 Stories form an integral part of every civilization. Along with money and writing, stories are an important medium, a medium for the collective advancement of human societies. And I must confess that it is these stories, apart from the philosophy, that has drawn me to the field of Hindu mythology in the first place, not really the religious or social practices or culture.

Stories about natural phenomena, like thunder, lightening, rain, dawn, night and day, seasons, form a large part of the human narrative. Weaving these stories requires imagination. This is especially true for phenomena that cannot be explained easily – like earthquakes, or weather, or eclipse. And making up ‘stuff’ about such rare, and yet seemingly un-explainable natural phenomenon requires an attention to detail, a bit of ingenuity, and at the same time a little bit of that ‘tongue-in-cheek’ humour that is typical of some of the early Hindu myths.

With Hindu Mythology, the additional requirement is to be able to embed the story in a larger narrative, since most Hindu myths are cyclical, repetitive and nested. This ‘story within a story’ is the most common format followed in Indian narration, and is seen in the great epics, many religious texts, almost all puranas as well as story compositions such as the Panchatantra and Hitopadesha.

So consider the story of how the ancient people tried to explain the phenomenon of solar and lunar eclipse - with a narrative that is embedded in the overall ‘churning of ocean’ narrative; which in itself is a story within the larger narrative of the constant battle between the gods and demons (devas and asuras), and follows after the great deluge that flooded the earth.

(Although well-known, I intend to write about the ‘Churning of Ocean’ at length some other time, to explore some perspectives that I find fascinating).

But coming to our today’s topic, it is a small yet interesting annexure to the ocean churning episode. Consider then that presently the churning of ocean is completed – a herculean endeavour taken up by the gods with the help of their cousins the demons, with the primary purpose of gaining Amruta, the divine mead or ambrosia that will make them immortal (know that in Hindu system, though, it is not food like the Greeks but a drink, rather, the "elixir of life").

The demons have agreed to help the gods in this endeavour only so that they too can get the Amruta. Overtly they have taken up the laborious task to assist the gods; but covertly they are planning to steal the Amruta all along.

The gods are aware of the treacherous nature of their cousins, so they hatch a counter-plan. One of the gods, Vishnu (notice how he is not yet the Supreme God with a capital G, but one of the 12 Adityas, a brother of Indra the lord of gods), takes the form of a beautiful nymph, an enchantress, called Mohini (Visnu’s androgynous form) and reaches the proceedings.

By this time the churning of the ocean is complete. All precious things that were under water - including the Sun, the Moon (Soma), the celestial nymphs called Apsaras, the great horse Ucchaishravas, the goddess of wealth Laxmi, the wine Varuni and several other great and desirable things or beings – there are about 14 of them in total – have surfaced. The Sun and the Moon, being forms of light, are welcomed instantly by the gods, who themselves are forms of light (the words deva and diva for light have similar etymological roots) and are admitted to their company. The great black poison Kalakoot has also surfaced, and Shiva / Rudra has swallowed it to protect the world from it.

Finally, Dhanvantari, the god of medicine, who later gets admitted by the gods in the pantheon as their medic, surfaces from the waters, carrying a white pot of Amruta. The moment the gods and demons see the Amruta, they drop their chore and clamour to drink it.

At this stage, Mohini intervenes and walks into the melee. As the gods and demons see this celestial beauty with mesmerizing looks walking towards them, they suddenly stop fighting. Mohini walks right in the middle of the hustle, and takes the pot from Dhanvantari’s hands. She then turns around and asks who all worked hard to get the Amruta out. As both the gods and the demons claim they have, she reasons that they both should get a share. This is agreed, and to distribute the Amruta fairly, Mohini suggests that the gods and demons arrange themselves in a queue – gods on one side and demons on the other.

As the gods sit on the right side, and the demons to the left, Mohini begins the distribution of elixir starting with the gods, as if casually – all the time giving reassurance to all that there is enough and more Amruta in the pot.

As the gods drink Amruta, there is a change in them. They turn more radiant, lighter, and feel powerful. The demons, meanwhile, are exhausted with the labour of churning. Also their minds are muddled, partly due to the exhaustion, partly due to the venomous smoke of the serpent Vasuki they have been inhaling during the labour, but also largely due to Mohini’s charm. Secure in their folly, and the false sense of security of their being superior to the smaller, ‘inferior’ Aditya cousins, the daityas and danavas (asuras) await their turn.

Only one demon, Svarbhanu (sometimes he is also unnamed or is called Rahu instead of this name), gets impatient. He seems the gods, then he sees his brothers, and decides to break the arrangement. He sneaks away from the ranks of demons and joins those of the gods. As Mohini is distributing Amrita, the nectar, Svarbhanu creeps from behind the line of gods and positions himself at the end.

Do take a moment to pause and reflect how gods and demons must be so physically similar that a demon can easily pass off as a god. The demons in Hindu myths are not ugly, dark, hideous, but in fact almost undifferentiated from gods in their physical appearance. That the demons were ugly, dark and hideous is part of the now-outdated Western view of depicting the puranic battles between devas and danavas as a reflection of the Aryan-Dravidian divide - which has also colored the views of countless Indians themselves about their own stories and mythology.

The unsuspecting Mohini reaches the end of line and gives the Amrita to Svarbhanu as well. But his mischief has not gone unnoticed. The newly born Sun and Moon have seen how he has sneaked out of demons’ side and joined the line of gods. So just as the Amrita is washing down his throat, they scream out and the trickery gets noticed by all. Mohini looks at the demon with disbelief, then at once changes back into the fierce, powerful male god Vishnu, who summons the Sudarshan chakra and cuts the demon’s head off.

But, and here is the wonderful part, since the demon has already had some Amrita, the beheading does not kill him. The head falls to the ground, while the decapitated body starts to wander off aimlessly. The defiled demon gives a terrible cry, and the head leaps towards the Sun and the Moon to teach them a lesson. The Sun gets scared, and the Moon turns pale. Suddenly the mood of the gathering changes. Commotion ensues among both gods and demons, and both pick their weapons against each other one more time.

In the heat of the moment, Vishnu hands the pot of Amrita over to Indra, who takes it and flies up in the sky, along with some of the gods, with the others stay on ground to hold back the demons’ attack. Thus the gods and demons renew their battle after the brief interlude during the churning episode, a battle that continues to eternity (or the end of world, which usually comes first in Hindu cosmology).

But what of the beheaded demon? The severed head is now called Rahu, while the body is called Ketu. Later, Brihaspati, the priest of gods, in a feeble attempt of mending ways between the warring parties, cuts the serpent Vasuki in two and attaches the corresponding parts to the defiled demon.

So, Rahu, the Asura’s head, gets the tail of serpent; while Ketu, the headless body, gets the serpent’s head. Ketu continues to wander around the solar system aimlessly, like a comet. Indeed, the name for comet in some of the Indian languages is ‘Dhoom ketu’ – Ketu with smoke. Ketu typically means 'pataka' or banner, and the comet does look like a flag or a banner. Siddhartha Gautama (Buddha) is called "Dharma-ketu" in some later scriptures - the banner of dharma.

Till date, Rahu, the head of the demon, continues to be mad at the Sun and the Moon for his plight. So he chases them in a serpentine path, and attacks them when they come close to him and tries to devour them (having no hands, he cannot do anything else but use his mouth). When he swallows either of them, we get an eclipse.

Now here is another wonderful addendum to the story. To his despair, though, and to our relief, since Rahu's throat is slit open, the Sun and the Moon slip out from the bottom end every time he gobbles them, and they continue to shine their light on the earth. And that is how we see the end of the eclipse each time. This play of Rahu chasing the Sun and the Moon, and they giving him the slip, goes on forever. But the two divine lights continue to be in great fear that one day Rahu will consume them completely.

So that is the long and short of how Rahu and Ketu came to be. What is interesting is that Rahu and Ketu are considered shadow planets in Hindu astrology, and included in the nine planets (navgrahas). More about the individual planets later.

Wandering Nomad
" I am what I am Made weak by time and fate But strong in the will to survive, To strive, to seek, to find, And not to yield." - Alfred Tennyson "Ditto, and other blah blah" - Me